She’s the youngest person in the room, widest smile and her little feet patters on top of the gymnasium floor every two seconds. She isn’t hard to miss because every other child is 2x her size. She is running back forth from her father and a look of fluster comes across his face everytime she runs from his arms but she is safe. Her mother is on the other side of the gym listening to each guest speaker and each performance. The gym is packed with excited teens, volunteers, guest speakers, local artists, and family members. This is the first annual overnight youth summit for the teens of St. Louis City.

This was right up my alley. I already have a passion for working with youth so volunteering was a must for me on this Friday evening. Along with my best friend Candess, we were given a job to oversee the entrance table, check in participants, collect money for entry, and snap wristbands. Occasionally we would make jokes with the teens that appeared to look like they did not want to be there but their response would be, “This is just how I look.” At one point in the evening, we left the venue for the nearest dollar store for telephone cords so the girls could play double-dutch (I still don’t know how to double-dutch 🙁 ).

The night was winding down as all of the teens were already sitting in the bleachers watching the next performer. Candess and I were remained sitting at the entry table and that little girl’s mother came over. Everybody knows how random I am, so, I decided to engage in conversation with her.

“I know a lot of people always ask your husband and the birth mom how they are doing after everything that happened last August, but how are YOU doing?” –me

“A lot of people ask me how I am doing. More than you would think because they know the relationship Mike and I had. Last year was really crazy. I am at peace with Mike Mike’s death. I am not at peace with seeing the man I love hurt the way that he hurts and I can’t do anything about it.”- Calvina (Cal)

The “Mike Mike” she is referring to is Michael Brown Jr and her husband, Michael Brown Sr. The little girl whose feet is pattering against the gym floor is Mike Brown’s baby sister: only 2 years old. I wonder if she would even have a memory of her older brother who, respectively speaking, made the nation stop and pay attention.

Cal is so genuine and candid. She didn’t know me from Adam, but spoke with me as if we were two long lost friends who were finally catching up. She expressed all that she went through last year but assured me that her faith is strong.

In June of 2014 they lost everything they owned in a house fire, her and Mike Sr. were married in July of 2014, and she lost her stepson in the craziest of ways on August 9th.

“I don’t know what all this means but Lord, could you give me the heads up next time you are making plans?”

I can’t fathom enduring what this family has endured but her current smile is very real.“There were so many times I wanted to pack my bag and go but, no. I couldn’t.”

She would look over to her husband’s direction and smile. By this time he was over by the mic thanking the participants for coming out to the Chosen for Change first annual Youth Summit. This organization was made in honor of Mike Brown Jr. and their focus is to save lives one day at a time through empowering youth, strengthening families, and giving back.

She went on to tell how her and her husband met (when they were teens) and how they reconnected. She has other children who were also at the summit sporting t -shirts honoring their brother and taking turns dancing with their baby sister.

I have done my fair share of watching several media outlets create stories on Mike Brown and Ferguson but for once, it was nice to see the family first hand. It was nice to see that although this family has endured extraordinary pain, they are still an ordinary family that can still do ordinary things.

Since August 9th, the Browns have spent everyday honoring Mike Jr.’s legacy by going across the country speaking about police brutality, race issues, and giving back to communities all while grieving with a camera in their face. Imagine losing a child in the way that they have lost a child but instead of prayers and condolences, the country reverts back to its segregated ways and blames your child for his/her own death; Calling your child everything but a child of God and labeling the killer as a hero.

No one really knows what happened on August 9th nor will we ever truly know but one thing I do know, this family is like any other family and deserves the respect, empathy, and prayers that you would want: white, black, purple, mahogany…whatever.

Cal and Mike Sr., I do not know you all very well but I admire your strength, courage, resilience, and love for one another. Continue to do great work in shedding light on the ills of this world and stand firm on God’s grace. 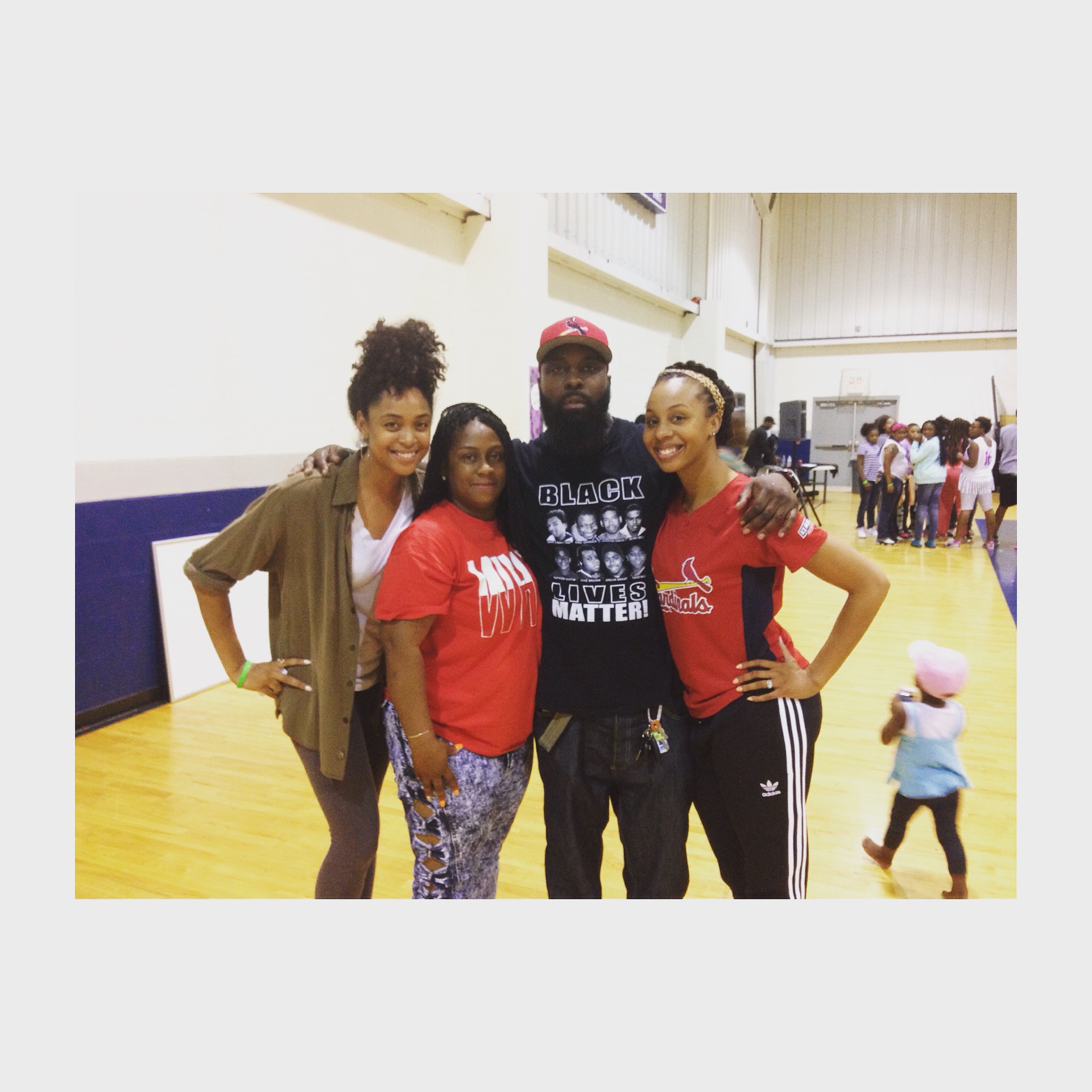 Me, Cal, Mike Brown Sr., Candess (little mama in the back)